Why do equities sometimes outperform around the end of the month? The “Turn of the Month Effect” in the Equities

As the markets close into the end of the first half of the year, global markets have posted mostly flattish to negative returns, market outperformance can be derived through finding alternative alpha in observable patterns.  One such alpha opportunity is the “Turn of the Month Effect” that occurs at the end of every month as the calendar turns into a new month.  This peculiar pattern is driven by particular inflows into equity funds that occur towards the end of the month.

The “Commodity Trading Advisor” (CTA) Fund has become synonymous with a trend-following fund that simply follows market trends, hoping to catch a long-term macroeconomic move.  A commodity trading advisor (CTA) is an individual or firm who provides individualized advice regarding the buying and selling of futures contracts, options on futures or certain foreign exchange contracts.  If markets are performing, these CTAs typically receive investment inflows from clients around the end of the month, leading to some discernable patterns around that time of the calendar.  In particular, the S&P tends to outperform around the end of the month into the first trading day of each month, leading to outsized returns around these days due to buying inflows into CTA Funds and other long-only funds.

As CTAs comprise a sizeable amount of market positioning, Team CrowdThnk has researched this peculiar phenomenon and completed some studies on the “End-of-Month” effects (or “Turn-of-the-Month”) in regards to CTA flows and performance.  Since 2000, a full 90% of cumulative returns for CTA funds have traditionally come during three “Turn of Month (TOM)” days: the last 2 days of the end of month and first day of the new month.  In this study, we assumed the last day of the month was T = 0 while the penultimate day is T = -1 and the first day of the month is T = 1 and aggregated all returns for each trading day according to its placement on the calendar.  This equates to a significant percentage of returns allocated to just 3 days of a calendar month, producing a market anomaly – a true departure from the Random Walk Hypothesis.  The reason is because historically, CTAs have received inflows at the end of month and therefore increase their allocations of current positions (typically long equities on any given month) with the new cash, boosting returns heading towards month end.  CTAs also likely deploy this new injection of inflows into the persisting trends at the end and beginning of months, reinforcing the performance around this calendar time period of any asset that is trending.  In aggregate, since the year 2000 when we commenced this study, equities have generally been on an upward trajectory, explaining this buying pattern towards month-ends.

Looking at data since 2000, the Turn-of-Month (TOM) days produce +31 bps of performance, on average. This compares to +7bps return for all other 3-day periods within a given month. Another interesting observation in the data is the relative underperformance of days 2 and 3 into the new month, perhaps coinciding with a drop off in CTA inflows.  Using more recent data since 2012 and 2013, however, we find that this “Turn of Month” effect has been diminishing.  Perhaps this pattern has been detected by savvy market participants and most likely has been arbitraged away.  However, the fact that this market anomaly has persisted over nearly 20 years speaks volumes to the impact of inflows on a particular, specialized strategy.

The majority (90%) of CTA returns come during the last 2 days and first day (3 days total) of the month:

Average Return for Days of the Month, CTA Trend Index: 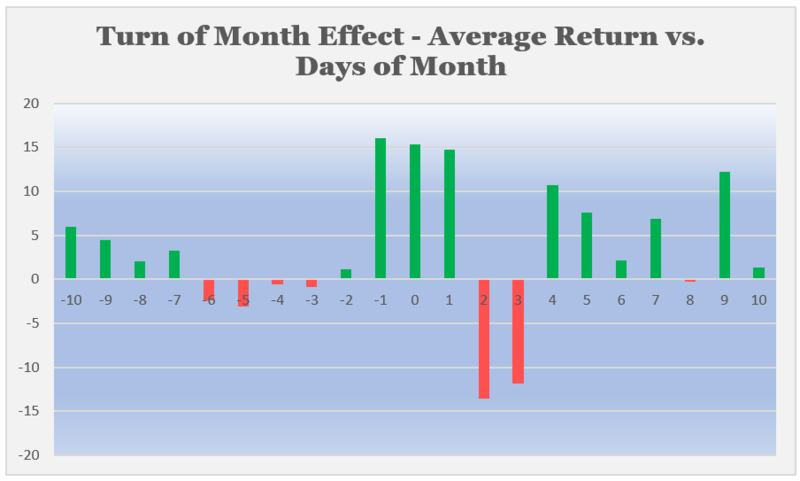 What does this mean for today’s markets?

Given that markets have been roughly flat for most of the year (S&P +1%, DJIA -2% as of June 28th), it’s not a certainty that CTA Funds will receive fresh equity inflows to pour into the Equity Market.  Thus, it would not come to a surprise for Team CrowdThnk to see a de minimis effect over the next couple of days.  Additionally, the fact that it coincides with quarter-end and half-year-end, could present additional wrinkles into whether the “Turn of the Month Effect” holds true in 2018.  Could the inflows into CTA Funds even be big enough to make a difference on the overall market?  That depends on the size of the inflows, but as Trend-Following Funds have not necessarily performed well this year, it would be difficult to assume they will receive additional inflows.  In any case, this particular “Turn-of-Month Effect” should be noted for handy reference to perhaps explain outperformance in and around the end of the month.