While the fallout from the historic plunge from the Turkish Lira remains to be seen and its contagion across global markets has investors on edge, there are a few historical precedents that give insight into the potential future path for the Turkish Lira.  In particular, Turkey’s currency crisis has a few historical parallels to the Asian Crises of 1997 which beset many Asian countries and ultimately ended up needing IMF support to stabilize their currencies.  With a maligned monetary policy and economic direction, there are bound to be a few more bumps in the road with high volatility before the path for the Lira improves.  By delving into what transpired in historical crises, we can gain introspection into what can transpire in the future.

What is happening in Turkey?

Turkey’s current fiscal and economic position is disastrous with high inflation, large deficits, expensive borrowing costs and mounting debt.  This has amounted into a catastrophic loss of more than 40 percent of the value of the Turkish Lira this year.  The situation came to a boiling point as the US government has been pushing Turkey, a strong NATO ally, to release an Evangelical Christian pastor, Andrew Brunson, who had been detained in Turkey on terrorism charges.  After profusely refusing to do so, the US government announced a stiff doubling of existing tariffs on steel and aluminum exported from Turkey as a retaliatory move.  As a response, Turkey doubled retaliatory tariffs on US cars to 120% and alcoholic drinks to 140% while banning US electronics in the country.  While just a symbolic act, this is the economic equivalent throwing sticks and stones at bazookas and machine guns, as the US’s enviable position as the world’s reserve currency gives it a nuclear economic muscle in this spat.

However, most experts would agree this currency crisis has been a long time coming as the central bank, under Recep Tayyip Erdogan’s power, has refused to raise interest rates to quell double-digit inflation.  The removal of Quantitative Easing by the US Federal Reserve has also contributed to the turmoil as US dollars are removed from the global liquidity system, making it more difficult for foreign debtors who borrowed in dollars to pay their debts.  As of this week, after days of turmoil, the Turkish Lira recovered somewhat, helped by the central bank’s new liquidity measures and efforts by the finance minister to calm the markets.  However, a more appropriate response would be to raise interest rates (experts estimate an appropriate hike of 700 basis points), but Erdogan and his economic team refuse to do so as it would be seen as bowing down to international pressures to do what is otherwise a fundamental-solid strategy.

What does Turkey’s Crisis mean for the US?

As the S&P 500 sits near record highs during the longest bull market in US history, investors are confronted with an EM crisis that threatens to wreak havoc on an investment landscape already conflated by a global trade war. These concerns are undermining confidence in global financial markets and causing asset prices to fall, especially in emerging markets and Europe, where banks have significant exposure to Turkey.  To be sure, US banks have a very small exposure to Turkey’s sovereign government debt, with only $18 billion Turkish debt exposure across an aggregate of US Banks.   Furthermore, while it’s a relatively large nation with one of the highest weightings in the Global Emerging Markets Bond Index (EMBI), Turkey’s economy accounts for only 1% of the global economy.  Finally, Turkey only has a limited amount of trade and financial ties with other emerging market economies.  While there’s always a possibility that financial contagion can occur and convert one country’s misery into a broader problem for the investment landscape, it’s unlikely the turmoil will significantly infect the US economy or stock market in a major way.

What are some Historic EM Currency Crisis episodes similar to Turkey’s?

While Turkey’s currency crisis is presently occupying the minds of global investors, it’s certainly not the first time we’ve seen a parabolic move in a currency.   The old adage, “history doesn’t repeat but it does rhyme”, suggests that previous currency crises can give insight into what may transcend in Turkey. The Asian Financial Crisis of 1997 started in Thailand due to an unwillingness to support a currency peg while borrowing significant foreign debt and ultimately affected most countries throughout the Asian region.  The following year, Russia experienced a significant devaluation on its own merit.  These episodes closely resemble what Turkey is undergoing now in that they were brought upon by inept and misaligned economic and monetary policy agendas that contributed to a lack of confidence in and downfall of their currencies:

In the 1990s, the economic growth miracle in Asia was known at the Asian Tiger phenomenon as their economies boomed, particularly in the finance, real estate and construction sectors.  In May 1997, the Thai baht was hit by massive speculative attacks, but the Prime Minister Chavalit Yongchaiyudh was reluctant to devalue the Baht from a pegged regime for fear of what would happen to its foreign-issued debt.  Thailand had lacked the foreign reserves to support the USD-Baht currency peg, ultimately being forced to float the Baht on July 2nd, 1997.  In August 1997, the IMF granted a rescue package of $17 billion, helping the Thai Baht stabilize by January 1998, 6 months after the devaluation before strengthening as the economy recovered and they were able to pay back their IMF debts. 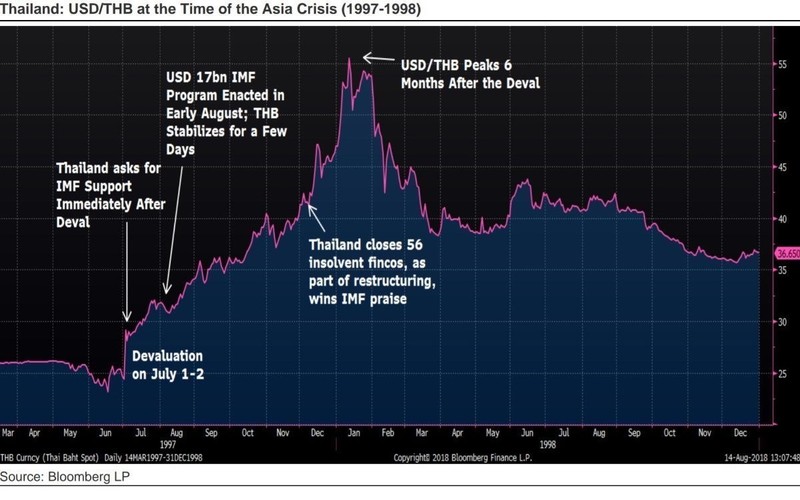 Unlike Thailand, in the summer of 1997, Indonesia had low inflation, a trade surplus of more than $900 million, huge foreign exchange reserves and a solid banking sector.  The federal government was in strong financial shape.  However, on the private side of the ledger, Indonesian corporations had been borrowing massive quantities in US dollars as the USDIDR exchange rate was stable. When the Indonesian central bank widened the currency band from 8% to 12%, the Indonesian Rupiah cam under attack.  This led to a free-float exchange regime that saw more speculators punish the Rupiah as corporate debts were put into jeopardy. Indonesian Corporations had to quickly buy dollars and the crowding effect led to corporates stumbling over themselves and pushing USDIDR higher.  The buying of dollars intensified into November of 1997 as the effects of the devaluation were realized and showed up on corporate balance sheets.  Indonesia ultimately ended up needing multiple IMF packages to stabilize the currency but that didn’t save President Suharto’s resignation in May 1998. 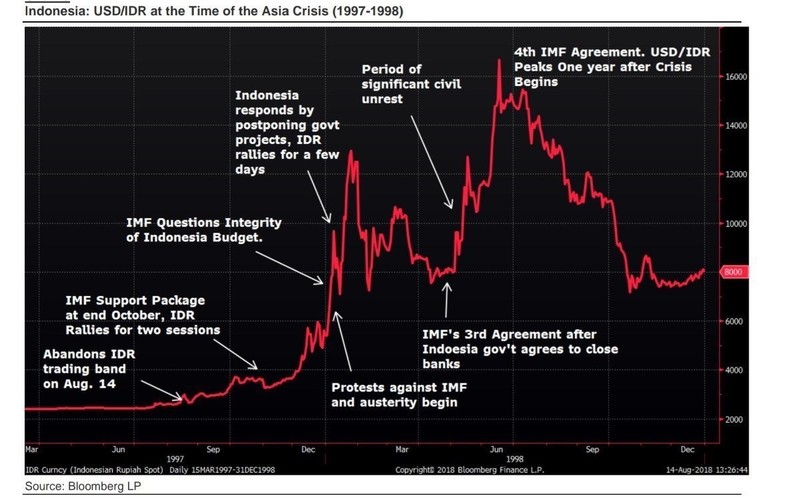 Korea was one of the fastest growing Asian tigers and its large corporations were borrowing to fund aggressive expansions.  South Korea’s business conglomerates, known as the chaebol, were seeking to become global players on the world stage, led by the likes of Samsung, Hyundai Motor and Daewoo, which all became household names.  However, the cost of this aggressive expansion was the risk of a currency devaluation as a significant portion funding was based in US Dollars.  The government had been propping up the Korean Won until November 17th, 1997 after which time they asked for IMF assistance on November 21st.  The Korean Won still experienced two-way volatility as the Korean citizens rebelled against accepting IMF assistance. The USDKRW exchange rate peaked and December and ending up stabilizing by the summer of 1998. 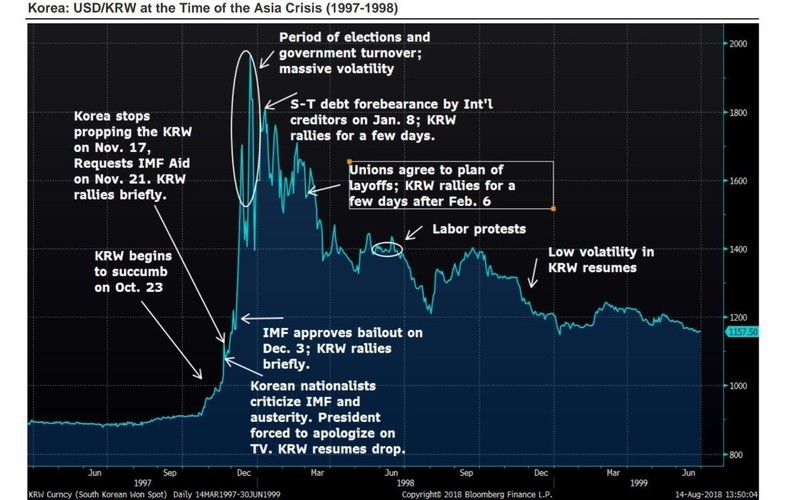 In the days following the Thai Baht devaluation in July 1997, speculators including George Soros took to shorting the Malaysian ringgit with expectations of a copycat scenario.  This led the Malaysian central bank to hike rates from 8% to over 40%, leading ratings agencies to downgrade Malaysia’s credit and corporate sector to junk status.  The Malaysian ringgit had lost 50% of its value by January 1998 at which point Prime Minister Mahathir Mohamad imposed strict capital controls and introduced a peg of 3.80 to the US Dollar.  The capital controls included fixing the local currency to the US Dollar, stopping the overseas trade in ringgit currency, restricting the amount of currency and investments that residents could take abroad and suspended the trading of approximately $4.5 billion worth of shares in the stock market.  These draconian measures held the USDMYR rate at 3.80 for the better part of 7 years, ending at the start of 2006 when the government actually allowed the ringgit to appreciate against the dollar. 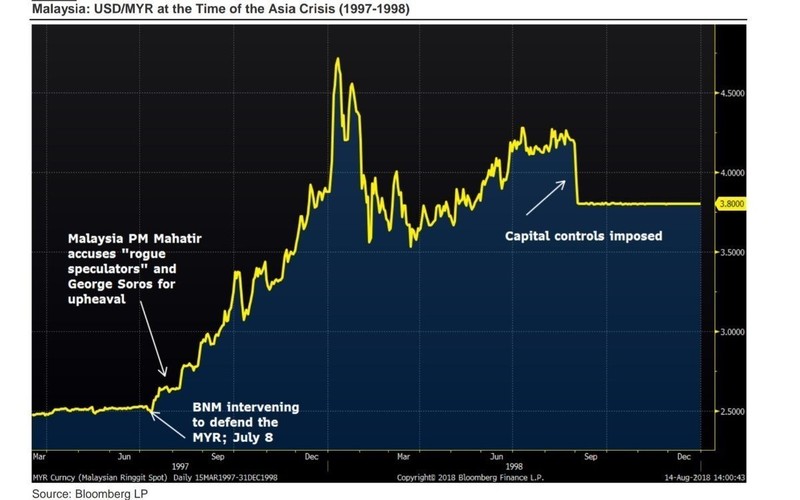 The Russian Ruble crisis was spurred on by declining productivity, a high fixed exchange rate and a chronic fiscal deficit.  Two external shocks – the Asian Tiger Crisis in 1997 and the decline for crude oil and nonferrous metals – severely impacted Russian foreign exchange reserves.  On August 17, 1998, the Russian government devalued the ruble, defaulted on domestic debt and declared a moratorium on repayment of foreign debt.  Russian inflation in 1998 reached 84% and welfare costs grew considerably while many banks folded as a result of the crisis.  The inability of the government to implement a coherent and logical set of economic reforms led to a severe erosion of investor confidence and an exodus away from Russian assets.  The financial collapse resulted in a political crisis as Boris Yeltsin lost political power and Russian citizens called upon his resignation. 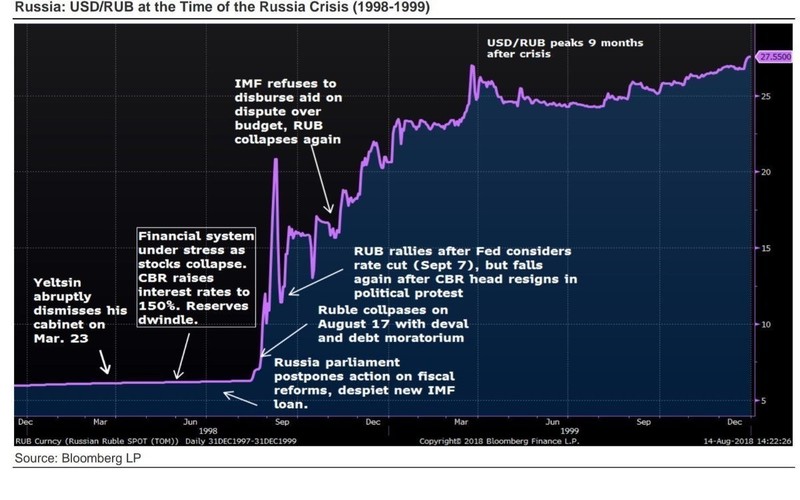 How Financial Contagion can spread Globally from Turkey’s Crisis

While Turkey only represents a small percentage of the global economy, there still exists a risk that contagion will spread throughout the world as financial markets are linked in a global manner. Turkey has borrowed debts in foreign currencies and as the Turkish Lira drops further, its ability to pay and service its debts will be increasingly difficult.  If Turkey defaults, it could create a domino effect as banks around the world stand to lose an estimated $223 billion of Turkish bonds, according to BIS data.  The banks with the highest exposure to Turkey are based in Europe with Spain, France and Italy standing the most to lose at $81 billion, $35 billion and  $18.5 billion, respectively.  If these banks report loses, it may hamper their ability to extend credit to other emerging markets or deserving entities.

Even more, the stench emanating from Turkey’s woes may cripple investors’ confidence in emerging markets in general, tempering their exposure and limiting investments across the global EM spectrum, even for investment and credit-worthy countries.  In regards to the Eurozone economy, impaired bank assets may reduce the credit spigot, limiting credit lending and slowing down European growth.  As Europe is a major export destination for US goods and services, this may dent US corporate profits and create a drag on S&P earnings.  Thus, the financial dominoes that may fall down are far and wide-reaching but the extent of which is still unknown, hinging upon whether Turkey can service their debts.

As history has shown with the Asian Tiger Crisis, just one country like Thailand can spark a region-wide panic, especially if a country or its corporations have indulged in too much foreign debt.  One pattern that has held true is that the decline in the currency typically continues for several months after the original devaluation, peaking around 5-6 months or so.  In many cases, the antidote for currency crisis involves negotiations with the IMF, but given the power and influence the US has over the IMF combined with the very public spat between Turkey and the US, it’s not a given that the IMF will become involved to save the day.  We’ll see if Turkey follows the same trajectory with a peak in the USDTRY pair occurring within the next 6 months, but until that time, there’s sure to be additional volatility amidst the great unknowns.