Knowing large positioning changes is very important in identifying the next trading opportunity, as some might be fundamental-driven and thus lasting longer while others might be tactical-driven and therefore short-lived. According to CrowdThnk’s consensus positioning measure, here are the 10 stocks that have seen the largest positioning since August 2018:

CVS Health’s stock price rose 16% in August on a strong earnings report, pushing its positioning from Slightly Underweight to Very Overweight based on CrowdThnk’s measure. As concerns about competition from Amazon seemed to ebb, optimism is coming back for the shares buying. In addition, CVS got some good news early in September that the Justice Department is nearing approval of the merger with Aetna. Permission could come within the next few weeks that would be the major driver of the stock over the near term. See CVS’s future price move forecast. 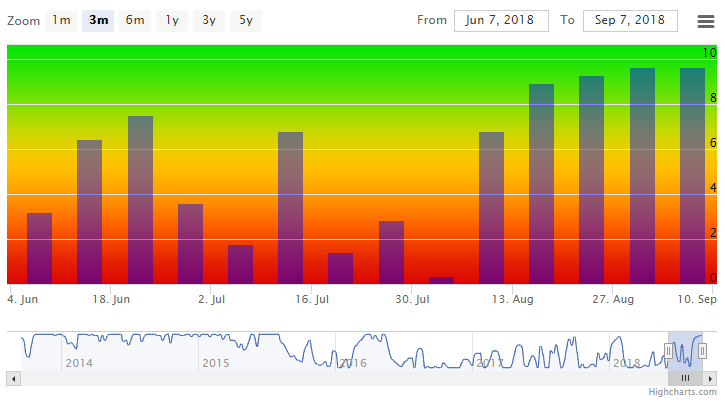 McDonalds’ share price has been rising significantly in the past month and its positioning has also gone from Slightly Underweight to Very Overweight. As one of the top chains in the world, the company has been issuing increasing dividends for 42 consecutive years. Management pointed out that international geographies are performing better than domestic segment as the stores are being upgraded in the last few years. The company still has room to boost operating margin toward 45% of sales thanks to the refranchising strategy that could further reduce the proportion of company-owned locations. See MCD’s future price move forecast. 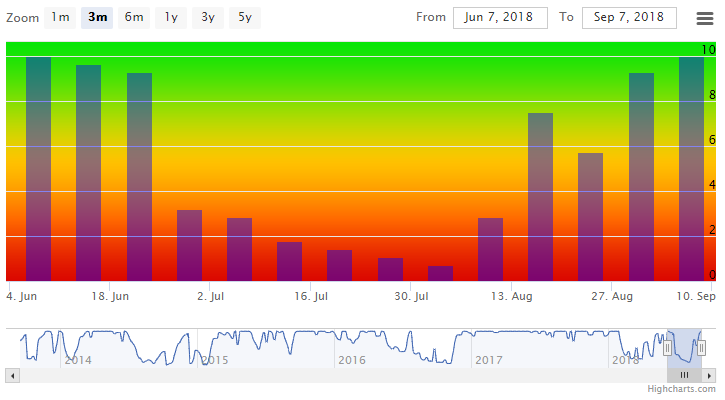 Over the past month, Starbuck’s stock price has been rally, pushing its market positioning from Very Underweight to Slightly Overweight, according to CrowdThnk. While Starbucks grew earnings overall, lower operating margins coming out of China are a bit concerning. However, the new partnership with Alibaba for delivery services will be a significant indicator as to how the company performs in China. Also, the company plans to continue its rapid expansion in China, where there is no major rivals. It is aiming for 6,000 stores in the country by 2022. See SBUX’s future price move forecast. 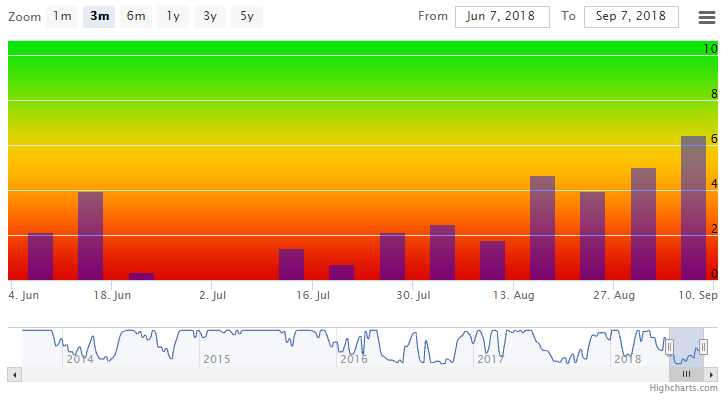 The leading US cruise company Carnival posted a strong earnings report and its stock price has been rally since then, making its market positioning from Very Underweight to Slightly Overweight based on CrowdThnk’s measure. Over the past one year, the sector has clearly underperformed the broader market. However, Carnival is an inspired choice for value investors, as shown from the company’s lineup of statistics. When estimates, analyst sentiment and industry trends turn favorable, this stock could be a compelling pick. See CCL’s future price move forecast. 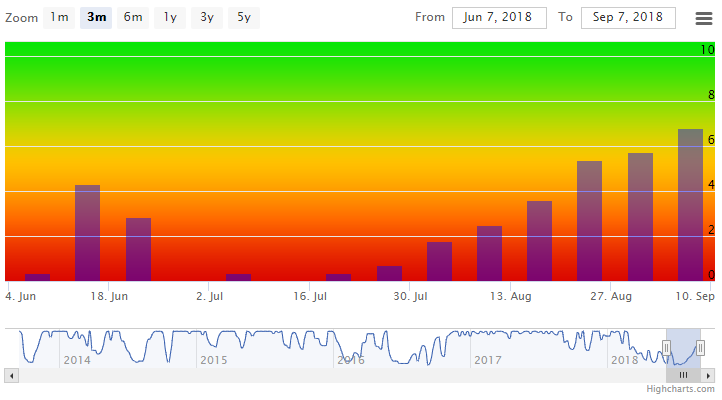 Exxon Mobil’s stock price has been moving higher since the middle of August, making its market positioning go from Neutral to Very Overweight. This rally since Exxon’s latest earnings release suggests the sluggish momentum of the stock might be coming to an end as the selling pressure is overdone and positives in the outlook for Exxon’s oil and gas production could force its share prices above prior highs. In addition, its dividend yield is currently around 4%, the highest since the 1990s. See XOM’s future price move forecast. 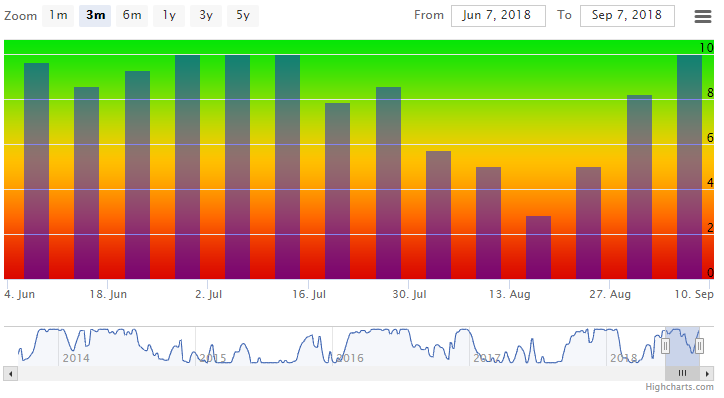 Tesla’s stock price has been sinking over the past month, reaching its lowest level since June and pulling its market positioning from Very Overweight to Very Underweight based on CrowdThnk’s measure. With the company’s CEO Elon Musk’s go-private saga now more than a week behind, it is facing increasing pressure on its fundamentals from investors and analysts. Increased competition as well as ending tax credits could be problematic for Tesla. See TSLA’ future price move forecast. 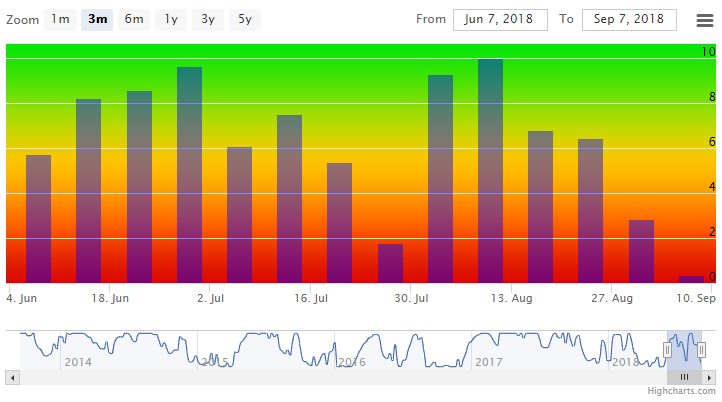 Chesapeake Energy’s stock price has been dropping over the past month, making its positioning from Slightly Overweight to Slightly Underweight. The company has been struggling to recover in recent years. It recently disappointed Wall Street with its earnings report again. The company posted a net loss vs. a profit during the same period last year. On the positive side, the company recently announced it would sell its stake in Utica Shale for $2 billion and use that to reduce its debt load. Overall, it is hardly a clear-cut stock as recoveries can often be hard to see because of all the baggage from the downfall. See CHK’s future price move forecast. 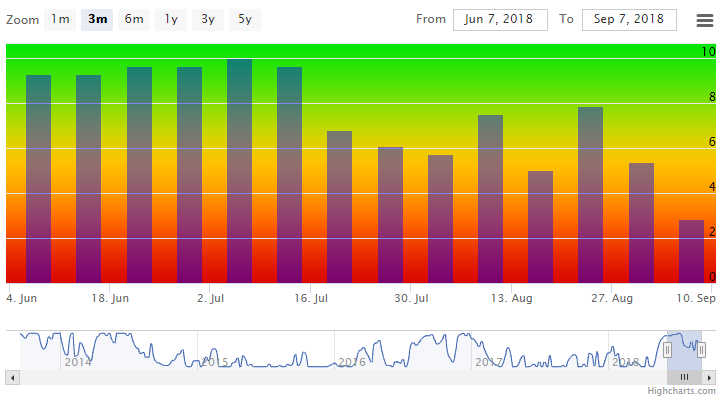 Over the past month, Facebook’s share prices continued to sell off, pulling its market positioning from Neutral to Very Underweight again based on CrowdThnk’s measure. The company’s stock is increasingly at risk as fundamental and technical challenges continue to mount. On top of slowing user growth, many investors sold FB stock because CFO said that the company expects its operating margins will fall over the next several years. Facebook is clearly expected to see its revenues continue to surge, but its declining profit margin will pull down profits for a while. Thus, its stock might be one to stay away from for now based on heighted scrutiny and shrinking margins. See FB’s future price move forecast. 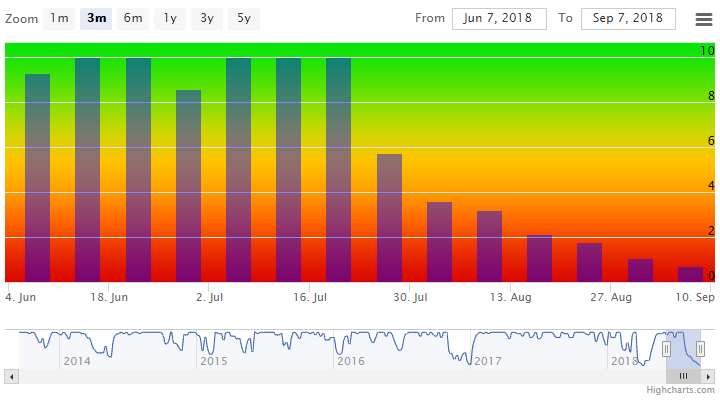 Following a few negative analyst reports, shares of Micron Technology fell significantly, making its consensus positioning go from Neutral to Very Underweight, according to CrowdThnk. As Micron is an extremely cyclical stock, negative analyst reports out of the blue are enough to drive down the stock. However, the upcoming multi-billion dollar buyback from the company should provide strong support. In addition, the company’s long-term prospects still look positive. See MU’s future price move forecast. 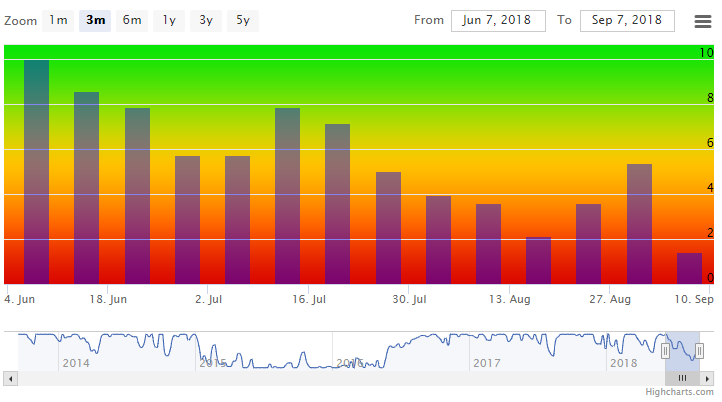 The negative price action over the past month of AT&T’s stock price is pulling its market positioning from Slightly Underweight to Very Underweight based on CrowdThnk’s measure. The company’s stock price has struggled for some time. The wireless carrier faces intense price competition while market conditions have forced a costly upgrade in a core business segment. However, its wireless network upgrades should finally bring some positive outlook as the company begins to launch 5G wireless networks this year. With restoring and improving its sources of revenue, the stock price could finally begin moving higher. See T’s future price move forecast. 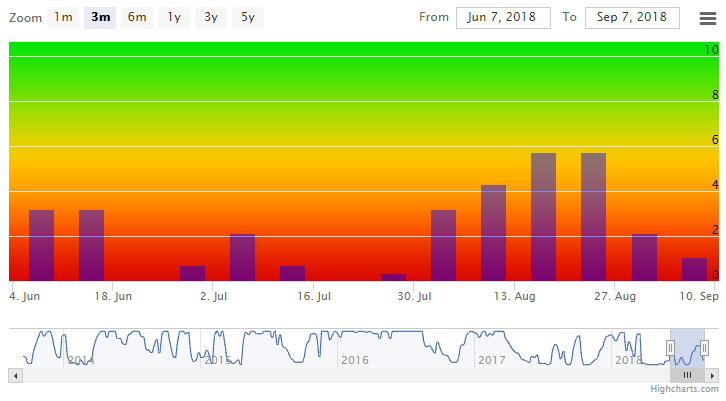