Knowing large positioning changes is very important in identifying the next trading opportunity, as some might be fundamental-driven and thus lasting longer while others might be tactical-driven and therefore short-lived. According to CrowdThnk’s consensus positioning measure, here are the 10 stocks that have seen the largest positioning since July 2018:

After the banking sector has been trading under pressure for the first half year of 2018, Bank of America had a strong rally in July, pushing its positioning from Very Underweight to Very Overweight based on CrowdThnk’s measure. However, even recent moves in the stock may appear bullish in the short term, the rally looks much less significant from the perspective of longer-term time horizons. Furthermore, the Q2 earnings failed to lead to large upside in the stock. Thus, the outlook for the stock remains uncertain in the long run but may still exhibit bullish sign in the short run. See BAC’s future price move forecast. 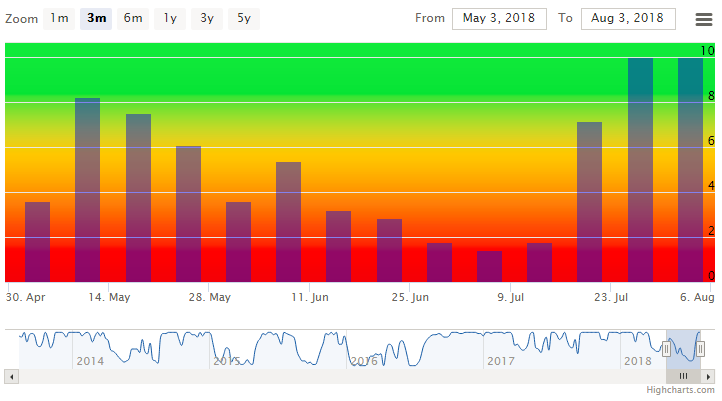 Similar to Bank of America, JPMorgan’s stock price has been rising significantly in the past month and its market positioning has also gone from Very Underweight to Very Overweight. From a valuation standpoint, JPMorgan’s P/E ratio has been beaten down too much, leaving it big room for coming back. In addition, the tax cuts have a potential impact of boosting the profitability in the second half of 2018, providing a great tailwind to the stock. See JPM’s future price move forecast. 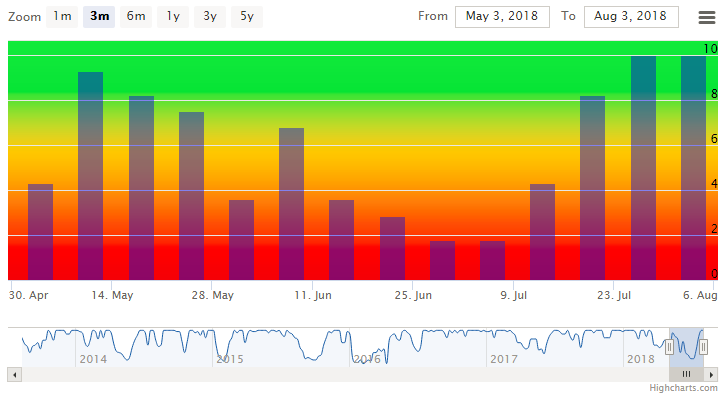 Around its partnership deal with Microsoft as its preferred and strategic cloud provider, Walmart’s stock price has been rallying significantly during the past month, pushing its market positioning from Very Underweight to Very Overweight, according to CrowdThnk. Even though the company seems to have matured and doesn’t have a lot of room to grow, the management is spending smarter to improve the company’s growth rate. In addition, Walmart is exploring the idea of starting a subscription-based video streaming service. Thus, long-term outlook for the company is looking promising. See WMT’s future price move forecast. 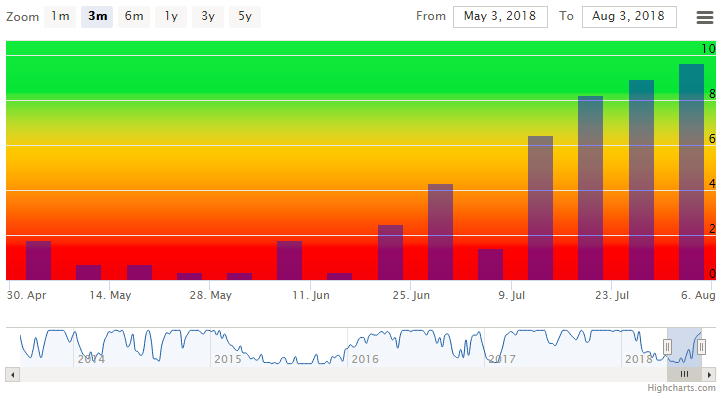 Oracle’s stock price hasn’t been the top performer so far this year, but its performance over the past month has made its market positioning go from Very Underweight to Very Overweight. For its stock price to continue to prosper, the company must continue to convert its core clients to the cloud while limiting any damage to its core database business. However, Amazon’s emergence as a major provider of data center technology will give Oracle a tough time. See ORCL’s future price move forecast. 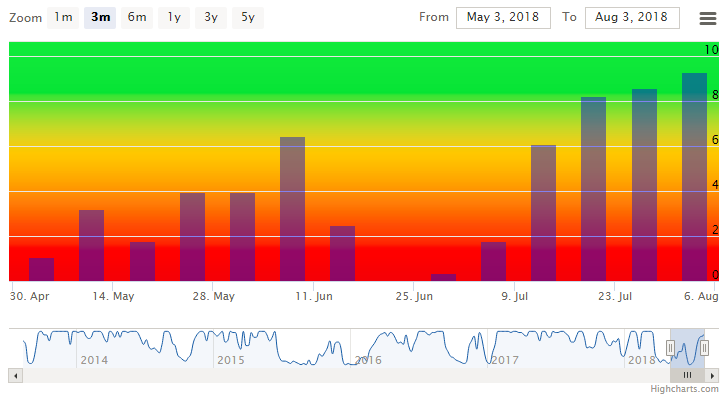 The semiconductor giant Qualcomm gained over 14% in July 2018, making its market positioning from Slightly Underweight to Very Overweight based on CrowdThnk’s measure. As the proposed buyout of automotive computing specialist NXP Semiconductors finally came to a stop, as well as Qualcomm’s earning report came far above expectations, investors seemed to relieve and sent the stock price higher. In addition, Qualcomm announced that it will begin repurchasing up to $10 billion of its shares. These factors might further push the stock price higher in the near future. See QCOM’s future price move forecast. 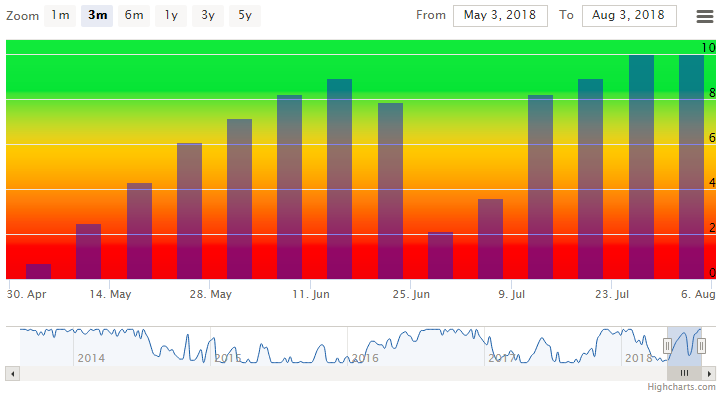 After earnings show effects of fake-account purge, Twitter’s stock price plunged over 20%, pulling its market positioning from Very Overweight to Slightly Underweight. The company’s executives said user decline was due to GDPR, ending text-messaging contracts and cleaning up the platform. Though the company expects headwinds for its user count metrics, the management still believes improving the health of its platform will provide a positive catalyst for revenue growth in the future. See TWTR’ future price move forecast. 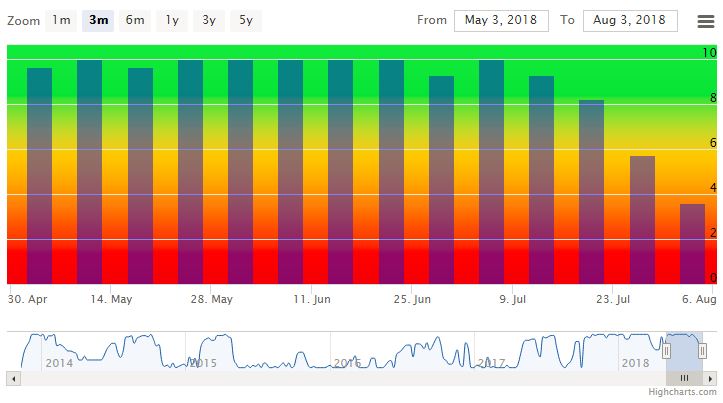 Facebook lost about $120 billion in market capitalization after its earnings report missed expectations on revenue and showed slowing user growth. Its stock price had recovered from a decline earlier this year in the Cambridge Analytica scandal, but declining revenue and user growth seemed to end that run. However, a few revenue-based fair value models show that Facebook’s current stock price is undervalued, providing a decent opportunity to long the stock in the short run. See FB’s future price move forecast. 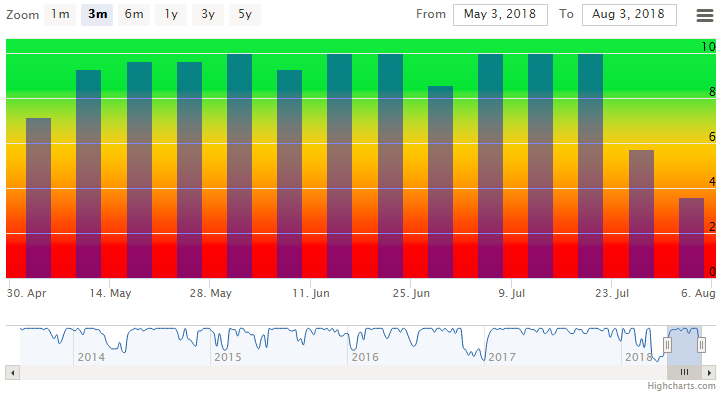 Netflix’s stock price sold off significantly after its Q2 earnings report, pulling its market positioning from Very Overweight to Neutral based on CrowdThnk’s measure. Despite its recent poor performance, the stock is still up over 75% for the year. However, its current valuation is unrealistic with low probability of keep growing the way according to the valuation. In addition, if its competitors start to have streaming content on their own platforms, that would put Netflix in a devastating situation. See NFLX’s future price move forecast. 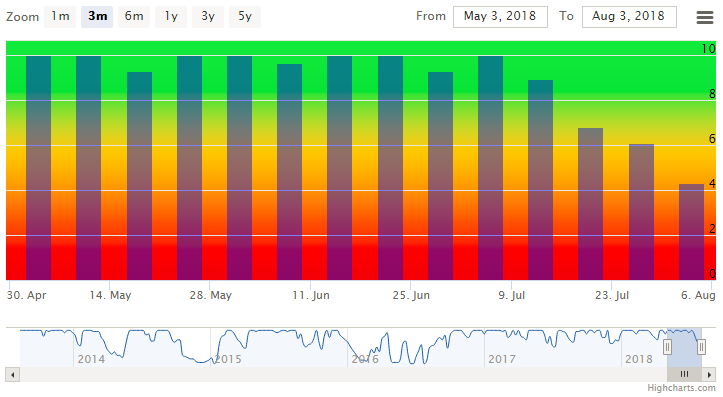 As Exxon Mobil faced setbacks in downstream and LNG demand in Q2, its stock price dropped 3% after the earnings announcement, making its consensus positioning go from Very Overweight to Neutral, according to CrowdThnk. The company has a lot of drilling to do in offshore Brazil, West Texas and offshore Guyana. This will greatly boost production and give investor confidence. If the offshore revenue recovers and onshore revenue grows in the double digits, the recent dip should be a buying opportunity for Exxon. See XOM’s future price move forecast. 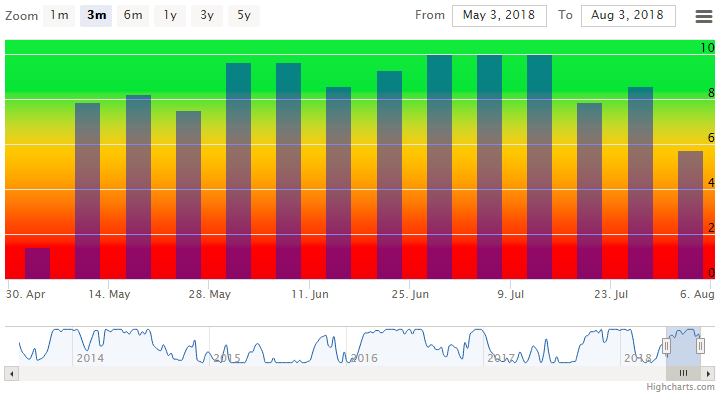 As being negatively impacted by the trade war and the rapid growth of group-buying e-commerce competitor Pinduoduo, Alibaba’s stock price has been selling off during the past month, pulling its market positioning from Neutral to Slightly Underweight based on CrowdThnk’s measure. By teaming up with Starbucks, Alibaba can stand to benefit on multiple fronts, but mainly through its newly acquired food-delivery platform: Ele.me. The partnership has the potential to create a new revenue stream to this platform. See BABA’s future price move forecast. 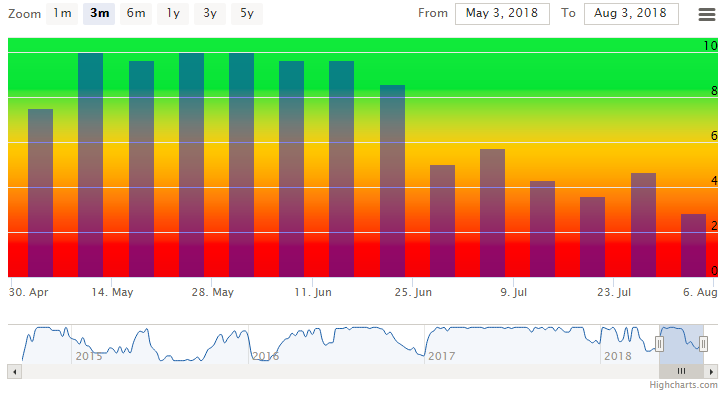